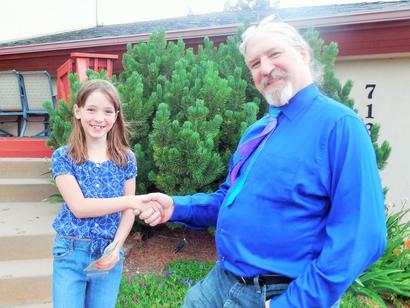 A funny, but sadly true, video about civil forfeiture by John Oliver.  Click the Play button to view.

Bitcoin Santa bringing good tidings from the Bitcoin community to our daughter.

You can hear Burt speak in person about his experience.  See the Speaking Schedule for his upcoming public appearances.

On the day I was arrested at my client’s office in front of my client and all my co-workers, they (Federal Agents) did not have to tell me why I was being arrested -- sealed arrest warrant.  That same day, they searched our house and did not have to tell us what they were looking for – sealed search warrant.  They took my cell phone and my briefcase and my business laptops at the client site.

After being arrested in front of our corporation’s client, who immediately terminated our contract, the federal agents took me to our house.  I was taken aback by the number of cars so I made a point of counting them.  I counted 22 vehicles.  The neighbors who watched the whole thing counted up to 35 agents involved in the search.

They searched everything, even the attic, crawl space, and every book.  It took my wife weeks to get the house put back together.  Imagine up to 35 people searching your house for hours.  During the search, they got into my Sentry fire safe containing all of my physical Bitcoins and other Bitcoin related items.  The federal agents took every computer and electronic memory device they found in the house.

Since I was not doing anything wrong, I never expected to be shaken down this way.  My security threat profile was common burglary and my main concern was making sure my wife would be able to sell the Bitcoins in the event of my death.  The vast majority of my Bitcoins were kept in a Trezor Bitcoin safe with the seed words kept off-site.

After searching my house for many hours, they phoned in a search warrant for my corporation’s office, which Magistrate Shaffer granted over the phone.  At the corporate office, they took our corporate computer and broke our printer.

I spent one night in Denver County jail followed by three days and two nights in the Federal Detention Center in the SHU (solitary confinement).  To be clear, I was in a very small cell by myself 23 hours a day and out in the exercise yard in a bigger cage for fresh air by myself one hour a day.  I talked to the other guys through the bars a lot since there was nothing else to do.  At no time did I feel endangered by any of them since we were all separated at all times.  I cried like a baby when I was released I was so happy.

The weekend they arrested me they also arrested four others.  The whole thing was called “Operation Avalanche.”  One of the other cases was also dismissed, but the government didn’t demand a forfeiture of assets from the kid, probably because he didn’t have any.

My attorney immediately asked to see the sealed grand jury testimony that was used in all of the indictments.  The government refused to let us see the testimony.  The Patriot Act is actually marshal law and lets the government act in secret.  Anyway, because the case was dismissed, I will not get to see the testimony used to get the indictment against me, so I will never know the extent of the fabrications, lies, half-truths, innuendo, etc. the government used to get the sealed indictment and sealed search warrants.

I don’t know why the United States Government saw fit to spend hundreds of thousands of taxpayer dollars (probably over one million dollars) to investigate, spy on, and prosecute me.  They could have sent me a cease and desist letter or told me to get a business license if they really thought I needed one.

I was first offered a “lessor felony” (said no) and then a misdemeanor (said no).  I finally ended up having to pay the Federal Asset Forfeiture Fund $80,000.00 in cash and Bitcoins in exchange for the United States Government dismissing the criminal case against me and settling the civil forfeiture case against the property they seized from my home, my corporate office, and my client's site.  The $80,000 extortion fee is less than it would cost to go to criminal trial (over $100,000.00 in fees and expenses) and civil forfeiture court (another $50,000.00 to $80,000.00 in fees and expenses).

The total financial cost to my family so far is $284,373.00 and may go higher as we have not received the final bills from some of the attorneys.

Part of the total cost includes the cost of replacing all of the computers and cell phones we needed in order for our business to keep operating.

It cost me the majority of my life savings to clear my name and avoid jail and we are now in debt because of this.  Many people just take a plea deal to get it over with and to avoid the high cost of defending a federal felony case which carries a maximum penalty of 5 years in prison and a $250,000.00 fine.

No, the U.S. Government will not reimburse me for my legal expenses even though the case was dismissed.

No, I cannot sue the U.S. Government for damages.  My wife may have a claim because they ignored that fact that she was an attorney and took her computers containing attorney-client privileged information without bringing in a taint team and also because the federal prosecutor tried to chill my wife’s free speech after my wife spoke out against civil forfeiture at a state judiciary committee hearing.

Our company lost its contract when I was arrested because they arrested me at the client’s office.  Our company has since found another client so there is money coming in at this point in time.

The Bitcoin community pulled together and donated $600 to cover the amount that was taken from my 8 year old daughter – her savings from birthdays, Christmas, tooth fairy, allowance, etc.

Some of the people that I was trading with turned out to be undercover federal confidential informants who videotaped and audio taped our trades.

Homeland Security Investigators used this “evidence” to claim that I was “operating a money transmittal business without a license.”

The allegation that I was operating a money transmittal business without a license was enough to send 35 or so agents to field search my house from top to bottom and take all of my Bitcoins.

In trading Bitcoins, common criminals are not the threat.  You need to be concerned about the law enforcement agents policing for profit and using the civil forfeiture laws to steal your Bitcoins for their Federal Asset Forfeiture Fund.

All this attention from the federal government for investing in Bitcoins by trading on Localbitcoins.com.